He was born in 1926 in Istanbul. In 1946 he attained the 5th place at Istanbul Chess Championship.
He became the first Turkish IM together with Ilhan Onat in 1975 in Italy. 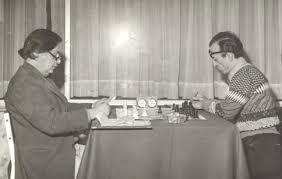 Among other tournaments abroad he represented the Turkish Republic in Varna, Tel Aviv, Havana, Lugano, Skopje, Nice, Malta and Luzern Olympics. He won the Turkish Chess Championship thrice in 68-69 and 1973. He wrote a chess column for the “Republican” newspaper for 17 years. This was the first chess column in Turkish history. He also published the much cherished Suer Chess Magazine with his own means till 1983.

The Genius of Nevzat Suer

Now, I strongly belive that Suer had an exceptional genius. To demonstrate this I would like to narrate a story. One day N. Suer suddenly came to my side and started telling me about a game he played. According to the story he was playing in a local tournament and his opponent played 1...f5 to everything except 1. e4. So what, you may say but pls follow me till the end of the story. He said that he played 1. e3 against his opponent and his opponent replied with 1...f5 heartily.

You may still be wondering what is so curious about this. Wait till you see N. Suer's next move.

2. e4!! was the move Nevzat Suer played. Now Black is playing against From Gambit (1.f4 e5) with colours reversed! The only other alternative is to play 2...e5 and accept a King's Gambit with colours reversed again. Since his opponent played and studied none of these openings he had got into a squeeze. I was amazed and asked him what his opponent did. He said that he played 2...e5 and lost in a few moves because he did not know the basic plans pertaining to the opening.
The genius of Suer was to imagine this whole affair and virtualize it on the board.

We learn much about Suer's musical life from his uncle. He was a very sought after pianist in Turkey at that time and also played the violin at the same virtuosity level.

Nevzat Suer and Some Nice Stories

One of the stories that I heard from FM A. Ipek was about when they went abroad for a tournament.
They were lodged at a hotel and the tournament began. Next day the team got together at breakfast and N. Suer complained about the music coming from outside at night. Some people agreed that the music was a bit loud. Suer said “ No... No.. No... It is not the loudness of the music that I am complaining about. It is the musician. He kept playing the wrong note everytime at a certain point in the piece that he was playing. He kept making the same mistake over and over again and this kept me awake!”

He also arranged the participation of the Turkish contingency in the Havana Olympics and was awarded a chess analysis table by Fidel Castro.


What took place at the Havana Olympics is shrouded in myths and legends. There are many versions to the events taken place there. I was able to discern the fact from the myth through Enis Bilyap who is the son of Siracettin Bilyap who was one of the strong National Team players in the Turkish contingency at the Havana Olympiad. He quotes his father saying the following: “ An announcement was made that a simultaneous display was to be made for the local residents. They were looking for 50 volunteers willing to play in the simultaneous exhibition from National Team players taking part in the Olympiad. These volunteers were going to make a simultaneous exhibition for the local residents and chess fans. It sounded a bit off but when the oraganizers explained the logic entailed we were persuaded. In a formation of 1000 people 50 Master players were going to place themselves 20 players apart and move at the same intervals among the players.

In the off day of the Olympiad Nevzat and I went to the organization area for the simultaneous. To describe the atmosphere there was impossible, one must see it with their own eyes. There were players, tables, chess sets and spectators in an area as large as 3-4 football fields. This was a sight that I witnesses for the first time and I understood the level of love for chess amongst the residents of Cuba. No nation could be more passionate about chess than the Cubans. Of course there is no need for me to mention the role Capablanca played in this.

The simultaneous started. We were with the most important players of the time and I was enjoying myself immensely. Nevzat was playing 2 (tables) infront of me. I think it was the 20th or the 21st move and suddenly a tropical rain began. We tried to continue for a few seconds but then all players began to search for a place to take cover. We too found an appropriate place. The sun showed its face again after a rain that took 30-40 mintes and everything went back to normal but the simultaneous exhibition was called off.” 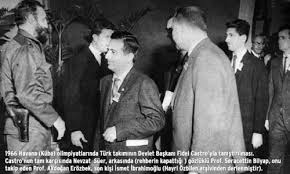 Suer left a mark in all areas relating to chess and Correspondence Chess was no exception.
He played correspondence games and the only one I could find was the one in the following link:

A correspondence game by N. Suer


My personal memories about N. Suer

N. Suer always came to ISD (Istanbul Chess Association) to play chess with his friends M. Boysan, D. Buyukozkaya and A. Ipek. They used to play blitz. Sometimes Ilhan Onat used to come all the way from Izmir and we witnessed a blitz showdown between the two IMs which everyone watched.
One day while talking, the subject came to his game with the Former World Champion T. Petrossian. He had lost the game but he put the blame on his tie. He said that his tie was too tight and prevented blood from going to his brain and this gave rise to a loss. I smiled. I liked his spirit!
He lived as a bachelor and never got married. However I remember him repeating the name of a lady called “Neval”. He used to say “Oh, oh, Neval” now and then and very often. I personally think that it was the name of his beloved. I hope they are finally together in the afterworld.